There’s been a lot of mystery with what’s going on in the world, including (dare we even mention it – the election), but that doesn’t stop the creative forces behind Trippy Tran Films, Escape West Films and Shake the Sky from making a killer new short in the 48FilmProject.com –  An international competition where teams create a 4-7 minute movie from start to finish  (script -> production -> editing and final upload) in just 2 days.

With Alex Harris as writer and director, this marks Trippy Tran Films’ short film debut in the City of Angels and our 10th movie (2 features, 8 shorts See Movies) and producer Anthony ‘Rory’ Tran’s 4th 48. Denizen is sure to leave a lasting impression that will send chills and thrills.

Synopsis: Marsha Harvey moves into a lavish Los Angeles apartment when she learns that the previous tenant who lived there died. When her neighbors invite her over for a dinner party, can she uncover the truth about what really happened that night?

Genre: Mystery
Character: Marsha Harvey, Recruitment Consultant
Prop: Black and White Photo
Line: “Do not worry. They are faking it.” 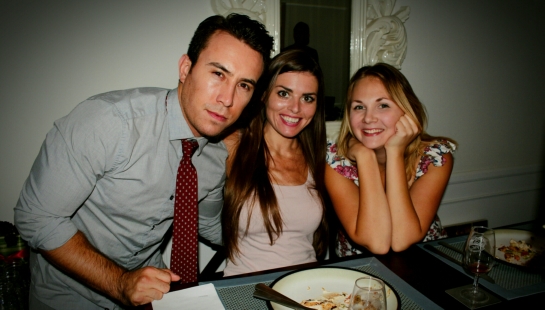 Have a murder mystery dinner party with us in ‘Denizen’.

Great location. Great everything. She lucked out.

“It was really good and suspenseful…loved it.” – Alan W., Long Beach, CA

“The actors and actresses played their parts excellently. Love the script. The editing was great. It kept my attention 100%!!!! The music was edited in perfectly. I believe this film will WIN. I love it !!!” – Amy C., New York, NY

“…’High quality!’ It is suspenseful and it was kinda scary at the end, too…The camera work was very clean and professional…Great job, to all those who worked on it!!” – Deanna S., California, OH

Find out more about the film when it premiers December 21st where you can vote until the 27th at the 48FilmProject website and subscribe to connect with us here and at YouTube.com/TrippyTranFilms for updates!

Can’t wait for DENIZEN? Here’s some behind the scenes from the producer’s snapchat.

And watch Charles Harris in our Top 10 Countdown video!