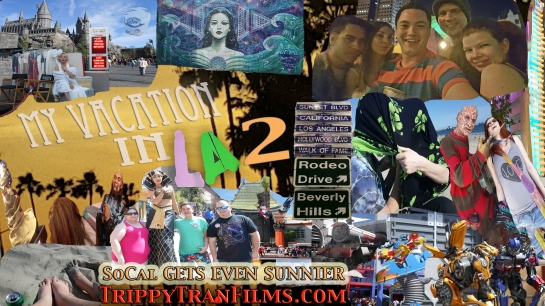 Official poster for ‘My Vacation In LA’ season 2

The sequel docu miniseries spin-off to My Vacation In Cincinnati goes beyond what season 1 of last year’s My Vacation In LA had with even more drama, travels, comedy and more plus, mentions of Erin’s role in Trippy Tran Films’ debut feature film coming soon. And it premiers exactly a year after the travels took place here on April 20th.

What’s not only exciting is the adventure, but all the music that was submitted for this season. Artists like Cat Magick, The Radio Broadcast, Renegades of Bass, Amy Cooper, Tronnica, Kodak859, Dustin Britton, The Comatoads and more signed up to compliment the show’s soundtrack.

SoCal Gets Even Sunnier with My Vacation In LA. Watch episode 1 now of season 2 and be sure to watch all of season 1 as new episodes release.

See Erin Wilkin in her character promo for Obliquity: Imagery of the Unknown.

My Vacation In Cincinnati 2 is slated for a late summer release starring Anthony “Rory” Tran AKA Trippy T as he journeys back to his hometown after living in Los Angeles for 2 years.

Hear the full theme song to #MVILA2 “Turn This Around” – Cat Magick.

Be sure to catch season 1

In today’s world, the media has pushed the envelope whether it’s saying “shit” on TV and radio more than ever, discussing racial topics and exploiting others for it, lots of boobage and sex on YouTube and TV (Robin Thicke’s “Blurred Lines”, Justin Timberlake’s “Tunnel Vision” and hello – Miley Cyrus) or just plain violent programming on network TV and cable access (Hannibal or MTV’s Scream that premiered Tuesday anyone?) Needless to say, the world has changed a lot in the last 10 years.


Watch the full movie for free below!

Disclaimer: This film is may be rude, crude, offensive, politically incorrect and is for mature (and immature) audiences who like that. The movie in no way represents the feelings or thoughts of anyone involved in the project. Trippy Tran Films holds no responsibility for the material of this film. You have been warned. You may get pissed off – or you may just laugh.. a lot.

Parodies in #TDHFE include Scream, The Ring, Final Destination, Darkness Falls, Buffy The Vampire Slayer, Nightmare on Elm Street, Friday the 13th, Freddy vs. Jason, Saw, Taco Bell, Scream 4 (even though it was released 6 years after Tran’s short, he originally had a Scream barn scene parody) and more. The script had tons more parodies that have never been filmed yet, but the final product is still pretty awesome.

Celebrate 10 years of The Dumbest Horror Flick Ever!
Watch the film below with bonus music video!
Watch and Subscribe on YouTube:

Flashback to 2004/2005. Director/writer Anthony Tran was 16 years old and went to YMCA Summer Camp before his junior year. There, he wrote a short skit including 4 girls in his weight lifting class. The skit was then presented on stage for the end of the week talent show called “Scream Again Yo” being a parody of the Scream franchise as well as other horror films. He then wrote his “Sk8r Boi” Avril Lavigne parody called “Hermaphrodites”. Then in his junior year of high school, he went to attend the Scarlet Oaks Vocational School in Cincinnati in the program most fitting for him: Digital Television Production or DTV. He was making new music videos, skits, learning how to edit with Final Cut Pro and more. His passion for writing hadn’t stopped and so he turned his Scream Again Yo into a 50 page script called The Dumbest Horror Flick Ever. With friends reading it, some shocked and some thinking it was the most hilarious thing ever, he began to film scenes for the project and edited it at school.

Now the kicker is that he was 16, young, a rebel, with an imagination like no other. He implemented racial issues into his movie and began to talk about what is funny in different cultures for an ending that left everyone washed away by the flood (except for a “lucky” few) spoofing The Day After Tomorrow and realizing that without the differences and cultures in our world, it would indeed be a boring place. But that’s not without saying the film may be offensive to many with it’s racial slurs, fat jokes and mentally challenged spoofs of horror icons Freddy and Jason.

As Tran grew up, he didn’t really get back into putting the film together as the script was only half shot, the Scream Again Yo scene never to be found (never filmed except for the YMCA Leaders Camp skit in which he paid for and never received a DVD for) and a lot of politically incorrect teenage angst built up as he was bullied in school before he began the project by several races that judged him for being half Asian (and ambitious) for being himself.

10 years later with moving films like His Name Is Walter to even more comedy mayhem like Wreckfest, Tran decided to take a look at whatever footage was salvaged before the film was gone for good. A fresh new cut – literally – has been made for the film. Some scenes were unable to be found like the classic The Ring parody where he actually shot the side of the TV with his friend Kat crawling out with long hair asking for chalupas. Memories like that will never be forgotten as he attempted his first feature, and only time will tell if any of the other footage will ever see the new world of YouTube and social media. At least we have this. The most offensive movie you may ever see.

Watch the original 2005 trailer below!