From Trippy Tran Films and Episode comes the story game that will wreck your world.
Now available to play for free on all smart devices! Play it today!

Play the game using a smart device, download Episode and then click this link –
http://episodeinteractive.com/s/4870975772426240 (more instructions below).

New video walkthrough available! Read about it here. Additional secrets and more below! 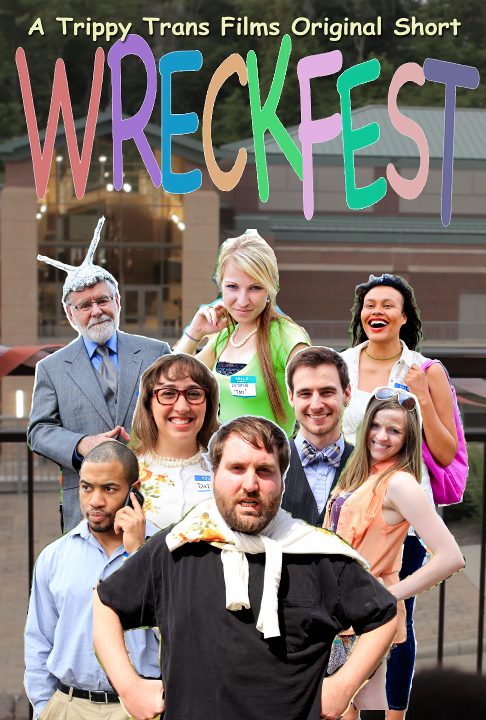 An innovative new way of reading and interacting with stories acting as a “choose your own adventure” is now coming to the comedy that will wreck you in Wreckfest – An Interactive Story! The Episode game that everyone will be talking about!

Summary: Two has-been “it” girls travel to their 5-year high school reunion with the same attitude they had in the past: snobby, oblivious and rude. As they see how everyone has changed and encounter people of all types, it’s up to them to make the change or stay the same.

The story game that will wreck your world is available for free – and this holiday season, we’re giving you all the secrets to  Wreckfest – An Interactive Story. Trippy Tran Films presents W-AIS which plays out like a choose-your-own-adventure story game and changes based on decisions you make. Including 10 epilogue/bonus character endings, plus 5 alternate endings for Tori and Vicki during the speech, with so many ways to wreck, the game will have you playing for hours and now the secrets to cause your own Wreckfest is now revealed!

Here is an example of how you can choose an option that will change the outcome of the scene/game. 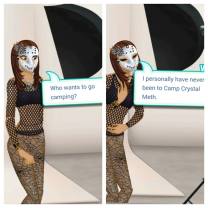 To play the game, using a mobile smart device click this link  http://episodeinteractive.com/s/4870975772426240 which will prompt you to download the free app Episode. Once downloaded, make sure to select Wreckfest – An Interactive Story or click the link above to send you to Chapter 1.

Tori and Vicki hit something while driving.

In around 30-45 minutes, you most likely can complete the story game and unlock the Photo Shoot bonus game the first time around, but there are 5 chapters of story with a bonus 6th Chapter bonus game which includes various interactive options. Unlock different outfits for your favorite characters, play secret games within the chapter and find bonus cartoon-esque movie trailers all by playing:

Wreckfest – An Interactive Story
Here are the secrets:

WRECKFEST CHEATS
This section tells you what you can unlock through playing story-mode Chapters 1-5.

ALTERNATE ENDINGS
How Do You React? 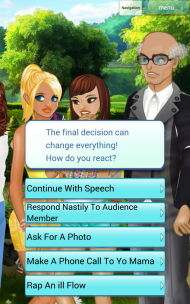 Choice 1. Continue With Speech – This is the original ending from the movie when it premiered at the 48 Hour Film Project in 2013. Vicki says her speech about how maybe that they are ugly on the inside, just like how people can be ugly on the outside and pretty on the inside causing Tori to misinterpret Vicki hearing that she calls her ugly and then attacks her!

Choice 2. Respond Nastily To Audience Member – Vicki lets her emotions get the best of her after the audience yells “You Suck!” and “Get Off The Stage” making her retaliate with some pretty vicious comments we’ll let you discover in the game!

Choice 3. Ask For A Photo – These attention-seeking women decide to ignore everyone else and take a photo during their big moment on stage. When they meet the photographer, jokes about a restaurant the #TrippyTranMan has made up called Wonton Noodle is here as well as other jokes on the photographer.

Choice 4. Make A Phone Call To Yo Mama – Hold everything! Vicki must let her mom know that she is accepting an award in front of her old classmates and by the time the dark comedy is over, Tori is shown rocking a baby  in her arms expressing that it took her forever to have that phone call. The ending gets even better when Vicki magically appears with a baby and they rock-a-bye the scene away!

Choice 5. Rap An Ill Flow – Wreckfest, we got nothin’ to do / We bash other people / Not me / Just you! -kicks off the scene- a featured line in various promos for Wreckfest and on the Director’s Cut. They are then in a recording studio spitting more of their “ill” flow leading into a weird conversation about twerking and frogs legs. This ending was suggested after the premier by the actress who plays Vicki’s actual mother and then was recorded in a car one day and tagged on promos. The extended version is revealed exclusively in this game.

When you choose, Homeless Man as the Final Wreck, you get the alternate ending from the Director’s Cut through his perspective.  Director’s Cut Special Edition DVD coming soon.

When you choose Daphne, Vicki threatens Daphne in defense of Tori and ends up going to court, resulting in a possible change of heart for Vicki.

When you choose Mr. Baldwin, you persuade him to take you to Mars with him and the wreck is beyond anything imagined!

When you choose Bradley Oliver, the girls make sure they get the job at Global United by appearing at the headquarters and facing the global man himself!

When you choose Anton, Tori agrees that you meet each other at the school dance, but after some intimate affairs, the Tori demon reveals herself in the bedroom!

When you choose Mason, Vicki takes him to an arcade to find out if he’s gay or not! This includes 3 choices which can only be discovered through repicking this alternate ending 3 times.

When you choose Cleo, you make a psychic phone call through your hotline and then see the Homeless Man and catch Tori’s ripped hair in this alternate perspective version of the Director’s Cut ending.

When you choose Katechi, cultural jokes are made as Katechi remains positive in showing you the way to view the Wreckfest – Behind-The-Scenes Photo Slideshow.

When you choose Trippy T as the Final Wreck, you actually get an Episode-esque trailer for the upcoming feature film “Obliquity: Imagery of the Unknown”.

When you choose Class Clown as the Final Wreck, you are told a story of over 1,000 years ago when the first Wreckfest happened at a castle. 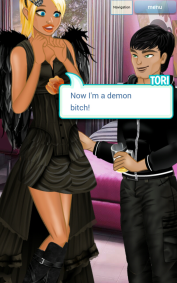 There are more. Can you find them?
Write us at TrippyTranFilms@gmail.com to get featured on our site!

When selecting VICKI for the photo shoot game, after choosing the outfit, you have the option to do a runway walk. The background for each of her moves after that will continue with the fashion show
background unless you pick “Have Your Cake And Eat It Too!” which will default the background back to the photo set background for all moves unless selecting “Runway Walk” again.

When you pick Tori’s moves, instead of “Runway Walk”, hers says “Runaway Walk” calling her a runaway.

BRADLEY OLIVER will test you.

Amanda and Chaz receive the sleep study.       Kandi searches for Tiffany in the hospital.

We’ll update the secrets, hints and cheats as we have them. There is a lot to be discovered in Wreckfest: An Interactive Game and we want to hear from you! Play the game at http://episodeinteractive.com/s/4870975772426240 and then using your mobile smart device, take screen shots of your favorite lines, scenes and wrecks and then upload them to our facebook.com/WreckfestGame page and be sure to #wreckfestmovie #wrecfkestgame #trippytranfilms

Send us your review of the game on facebook or at TrippyTranFilms@gmail.com Thank you so much for playing and for your continued support!

Before The Game Released: trippytranfilms.com/wreckfest-an-interactive-story/

Our new game “Wreckfest – An Interactive Story” released TODAY!!! Beat the game and unlock the photo shoot bonus game where you can wear some spooky themed costumes for your characters with silly fun activities to choose from! (Warning, contains adult content and language.)

The game has multiple outcomes that make the replay value different every time! At the end, you even get to pick characters and put them in a variety of outfits with fun mini-games like “Where’s Daphne?” and “Runway Walk”, plus alternate endings for all the characters that you will just want to play the game over and over to see what’s in store!

Take screen shots of your favorite scenes, lines, costumes and more and post them to http://www.facebook.com/WreckfestGame

For more info on the game and about our feature “Obliquity: Imagery of the Unknown” visit http://www.trippytranfilms.com 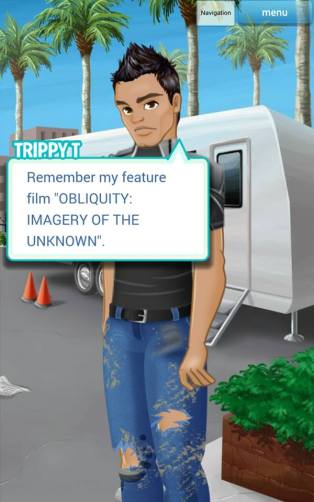 — Hey guys, Trippy T here, the creator of the movie and game and I am so excited to share this with you. I discovered Episode on a whim and have loved the app and game ever since. I was inspired to create a version of the game based on my 2013 short film “Wreckfest” to include a lot more content based on the film and characters. I have submitted it to be published on the actual Episode app. Please show support and help me get this game released!

Anthony Tran has been programming the game for over 3 months to the zany film Wreckfest – A Trippy Tran Films Short 2013 which now includes alternate endings for every single character as well as options that will allow you to alter the game’s content.

The story game is free and is not suitable for minors. Language, adult content and questionable content is not for the faint of heart. It will be available on mobile devices, tablets, ipads and more through the app Episode. A link will be provided on the day of Halloween.

Players are encouraged to take screen shots of their favorite lines, scenes and paths they take to share with others as they choose different paths. Once you play the 5 chapter game (with a bonus chapter including a very interactive playable game) the user is able to reset the progress and play it all over again and change the outcomes to see what paths they may have missed.

2 thoughts on “Wreckfest – An Interactive Story”